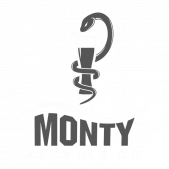 Why the name Monty, you ask? One day, when checking on the brewery I noticed that a roof tile had come away, but didn't think much of it. Several minutes passed when I heard a strange noise, to look up and see that a massive carpet python (around 10 cm in diameter) was making its way out of the roof. The brewery then had to be moved to a more secure location. I couldn’t name a python anything but Monty, and so the name stuck. After several years of brewing for our own enjoyment (and hip pocket), we developed a taste for craft beer, and the skill and passion soon followed. After entering and winning in the Queensland and Australian Amateur Brewing Championships over a few years, we soon realised our future was in brewing. We have since developed an all-electric brewery, and the software programme to run it. We purchased a beautiful property in Highfields with the plans currently underway to set up a craft brewery within a hotel.
see more

indicate beers that are not verified by this venue